New iPhone X unveiled in two weeks: The long wait is almost over for iPhone fans as Apple is due to unveil up to three new iPhone handsets in just over a fortnight.

The much anticipated tech launch will happen on September 12 in Cupertino – Apple’s US headquarters. Although, no official date has been set for the event, insiders claim the unveiling will take place.

Along with news releases on the latest gadgets and new tech Apple is working on, iPhone X fans are excited about the possibility of three new iPhone X models being made available on the market.

Speculation is rife on the tech and spec of these latest handsets, which will appeal to three levels of the retail market; namely economy, mid-range and luxury.

Rumours abound regarding bigger displays, microLED screens, next gen cameras, faster processors, bigger memory capacity and more. The iPhone X Plus, is rumoured to have a giant 6.5 inch panoramic display.

Even more exciting is the fact that Apple have done nothing to quash rumours on pricing – and the iPhone X Plus won’t be any more expensive than its predecessor – with the tag not exceeding the $1000 mark, even though the tech will be outstanding.

Not only that, but a cheaper version of the iPhone X with an impressively sized LCD screen, featuring the notch, will enable users priced out of the original iPhone X market, to indulge and have the next gen version for less.

It’s predicted that Apple will cut prices by also using a single camera, rather than the dual-lens on the new iPhone X mid-range handset. The iPhone is also rumoured to be available in a wide range of colours, thus appealing to a broader trends market. Some predictions even suggest there will be a shortage of the new iPhone X budget models, with demand out stripping supply in the weeks following the launch.

However, every silver lining belongs to a cloud, and Apple has hinted that the retail release of the new devices might be managed over a two to four month period, which means frustrating customers who are keen to upgrade their current iPhone X models

Reports have also suggested that the economy iPhone X has been delayed due to backlighting issues that have now been resolved, and experts predict it hitting the stores as late as October 2018. 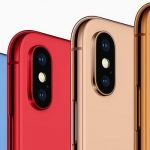